White belts in Brazilian jiu-jitsu will often have difficulty dealing with most BJJ positions when first starting in the sport. They will also get smashed at every training session due to a total lack of tactical knowledge. As well as the inability to perform techniques correctly that will help them to submit an opponent. However, if they learn to survive, things will improve, and they will realize their ambitions and achieve their goals.

Survival is an aspect of the BJJ sport that brings us closer to the founder of jiu-jitsu master Helio Gracie. Because of his more diminutive stature, he was forced to learn to survive in the face of much more substantial adversaries. Indeed, realizing that Helio will not be able to outmuscle or outlast his opponents, he will look for alternate survival methods.

His objective was straightforward: he did not want to die, even if he did not win the fight. So he was going to make it. The outcome of Helio’s adaptations was astounding.

By concentrating on the use of leverage as a tool for Survival, Helio Gracie was able to achieve incredible results. As a result, he transformed jiu-jitsu into a fighting style that could advantage a smaller person in a fight against a much larger opponent.

What Does Survival Mean In Brazilian Jiu-Jitsu? 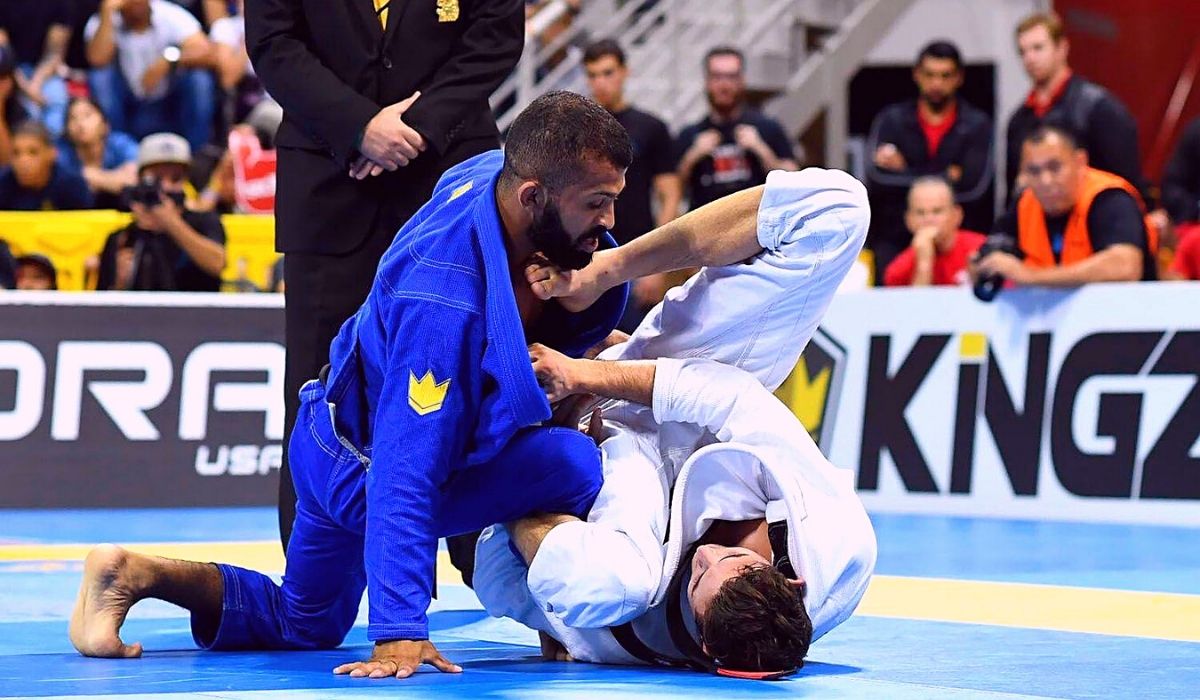 When it comes to BJJ training, Survival is one of the fundamental principles. Therefore, every white belt should be able to master entirely to progress further in his training.

The Survival will help you endure the rigorous BJJ training by mastering your breathing techniques and managing stress. Indeed, you should avoid overexerting yourself and learn to defend your face and neck from attacks.

The first time a new practitioner steps onto the mats at any BJJ academy, they will be accompanied by several concerns. Most likely, you’re having a nightmare about anxiety, fear, pain, or lack of oxygen.

In each situation, the student overcomes their deep fears by confronting them on several different occasions. At any point during the fight, the student can tap to end the battle and restart it for another shot.

Slowly and steadily, the student will break free from the cycle of fear over time. For every student, this is a natural process of mental conditioning that must be followed.

Instead of being paralyzed by fear, he learns to be confident, fortified, and ease in stressful situations. In other words, he frees himself from the constraints of insecurity by learning how to survive.

Why Should I Learn The BJJ Survival? This mental conditioning is carried over to the physical realm, and physical Survival is nothing more than an extension.

As a result, Brazilian jiu-jitsu practitioners should get used to the feeling of being physically attacked before engaging in combat. And, more specifically, to pressure and the claustrophobic feel of crushing weight that comes with it.

Thus, they will be mentally prepared to relax and let themselves be dragged into these difficult circumstances.

Consequently, Survival will be dependent on both the mental aspect of becoming comfortable while under stress and the physical aspects of using various techniques.

In Jiu-Jitsu, Do The Terms “Escape” And “Survival” Mean The Same Thing?

Survival and escape are two distinct aspects of Brazilian Jiu-Jitsu that must be considered separately. However, if you can get into a more powerful defensive position that turns your opponent into a weak place, it becomes much easier to escape.

The Survival does not depend on being able to escape submissions. So put, it is about placing yourself in a position where you do not have to rely on your muscles to defend yourself.

However, from a technical standpoint, you must be proficient in every defensive aspect of a position. And, you must also be able to carry out the following tasks at the same time.

It is impossible to overstate the significance of this. Otherwise, you will find it difficult to become comfortable doing all of these things simultaneously, leaving you at the mercy of your opponent.

The ability to sense what your opponent is looking for is essential to mastering all of these aspects of combat. And, your ability to use intuition will be critical to your Survival, and it will take a significant amount of time to develop.

How Can I Survival In Brazilian Jiu-Jitsu? A white belt must survive when practicing or rolling jiu-jitsu to avoid surrendering in the fight. The following are some pointers that can assist you in effectively navigating any difficult BJJ situation.

Of course, the white belt must learn to tap, and he or she must learn to tap early and frequently. Although all students need to remember that tapping is a beneficial component of the learning process, it is not mandatory.

How Can I Escape A Bad BJJ Position? Avoiding a bad situation as much as possible is the most effective way to proceed when trying to get out of it. To escape bad positions or potentially dangerous submissions, students must, of course, put in the necessary effort.

However, they will almost certainly be caught at least a few times during their training in jiu-jitsu. So, they must recognize that the best defense prevents the threat from occurring in the first place.

Consider the example of getting stuck in a deep triangle position: the longer you remain trapped, the less likely you will be able to escape.

Even if you’re familiar with numerous triangle escapes, you’re still reacting to the opponent with wrong body positioning, allowing him to maintain control of the situation.

In the end, it’s possible that tapping will be my best defense. This is why all students must understand how to use the positioning to avoid being submitted. The art of Survival is about assuming a jiu-jitsu position, such as the mount, side control, or the back, that prevents your opponent from launching an offensive attack. And, by doing so, removing the possibility of his submission.

It is all about changing the situation in such a way that the defensive player benefits. He becomes predictable as a result of this because he is fighting for offense from an uncomfortably positioned position. Because of this, he is limited in the movements he can make.

What Is The Best Way For White Belts To Use BJJ Survival?

A white belt is a symbol of Survival in many situations when rolling or training Brazilian jiu-jitsu. That’s why he has severe reservations about challenging an advanced practitioner in his team. Otherwise, he has no point of reference with which to compare himself, and he has not yet mastered the fundamentals of the art of jiu-jitsu.

Despite this, he only has one way to progress further: to survive while learning techniques and submissions.

Everyone, starting with the white belt, must learn to be patient. Students eventually lose their insecurities and remember to be patient as a result of dealing with superior power. A lifetime of benefits will accrue as a result of your survival training efforts.

Of course, a good instructor will arm the beginner white belt with more than just survival tools. But, like a young soldier in combat, his priority is to survive and return home to his family, which should be the instructor’s ultimate goal.

The BJJ white belt process teaches patience in situations where you have to tap or when you have to hold off your adversary. Students eventually arrive at a fork in the road where the instructor teaches them how to change the situation to avoid tapping out.

What Are The Benefits Of The BJJ Survival? White belts in Brazilian jiu-jitsu will benefit from the experience of surviving to develop their game and acquire more patience. In addition, using the technique will provide any BJJ practitioner, regardless of their age or level of expertise, enough time to locate an opponent and strike.

Furthermore, students must learn to seize their opponents’ open gaps. Since beating an opponent is all about recognizing the places in which he is susceptible to attack.

Indeed, this is an excellent display of the older student’s ability, and it serves as a perfect example of why everyone should strive to plug any gaps in their defense at all times.

The fact that you can defend against both more athletic and more vigorous opponents means that age is no longer a factor in the result of the battle. A white belt who knows how to survive will put more pressure on the upper colored belt if the game stays longer. In this case, the advanced practitioner has to move more and seek the tiniest opening in the white belt’s protective shell.

Aside from that, the white belt will put the higher-ranking student’s precision to the test. Since the senior student will often hurry through his moves as his foundation is disturbed by the white belt’s survival abilities.

As a result, the higher belt will put his adaptability and transition abilities to the test while also being pushed to come up with creative methods to submit the white belt without the use of force or sheer power.

Jiu-Jitsu Improving Give To Receive

Jiujitsu - January 11, 2020
0
Brazilian Jiu-jitsu and Grappling are about giving and take. It is impossible to learn if you are too rigid or refuse to...

How To Do The Reverse Armbar? (Helpful Tips)

Jiujitsu - September 22, 2021
0
The reverse armbar is one of the most tricky submissions in Brazilian jiu-jitsu. As a result, any BJJ practitioner should understand this BJJ attack...

Jiujitsu - December 14, 2019
0
Felipe Pena is one of the best combatants in Brazilian jiu-jitsu (BJJ). His ability to play both Gi and No-Gi jiu-jitsu...

Everything You Need to Know About Belts in Jiu Jitsu

Jiujitsu - December 19, 2021
0
The jiu-jitsu belts ranking system is used to determine the level of experience a practitioner has gained. The belt rankings in jiu-jitsu...