How to Score Points in Jiu Jitsu? (The Ultimate Guide) - Jiujitsu News Competitors can score points in Jiu-jitsu by achieving specific positions and techniques, such as taking the back, passing the guard, performing takedowns, etc. Besides, you must accumulate more points than your opponent while not being submitted to win a BJJ match.

This ultimate guide will cover the fundamentals of scoring points in Brazilian Jiu-Jitsu, whether you’re a white belt competitor or a blue belt competitor, etc. In addition, we’ll go over the most common ways to score points in BJJ matches. Stay tuned!

Table of Contents Show
1 What Is the BJJ Scoring Points System?
1.1 BJJ Points System IBJJF and SJJIF
1.2 ADCC Points Scoring System
1.3 NAGA BJJ Scoring System
2 How to Score Points in Brazilian Jiu-Jitsu?
2.1 Obtaining a Successful Takedown
2.2 Passing the Guard
2.3 Completing a Successful Sweep
2.4 Taking the Opponent’s Back
2.5 Mounting Your Opponent
2.6 Getting a Knee-on-Belly
3 Strategies to Score Points in BJJ Tournaments
3.1 Strategy to Score 15 Points in Jiu-Jitsu Competitions
3.2 White Belts & Blue Belts Tournament Strategy
4 Brazilian Jiu-Jitsu Rules and Regulations
5 Conclusion
6 Frequently Asked Questions
6.1 How Many Points Is a Sweep in BJJ?
6.2 How Many Points Is Closed Guard?
6.3 How Many Points Is a Knee on Your Stomach?
6.4 How Does the Point System in BJJ Work?
6.5 Do You Get Points for Side Control BJJ?
6.6 How Many Points Do I Get for Submission in Jiu Jitsu?
6.7 How Do You Win a BJJ Match?
7 References

What Is the BJJ Scoring Points System? 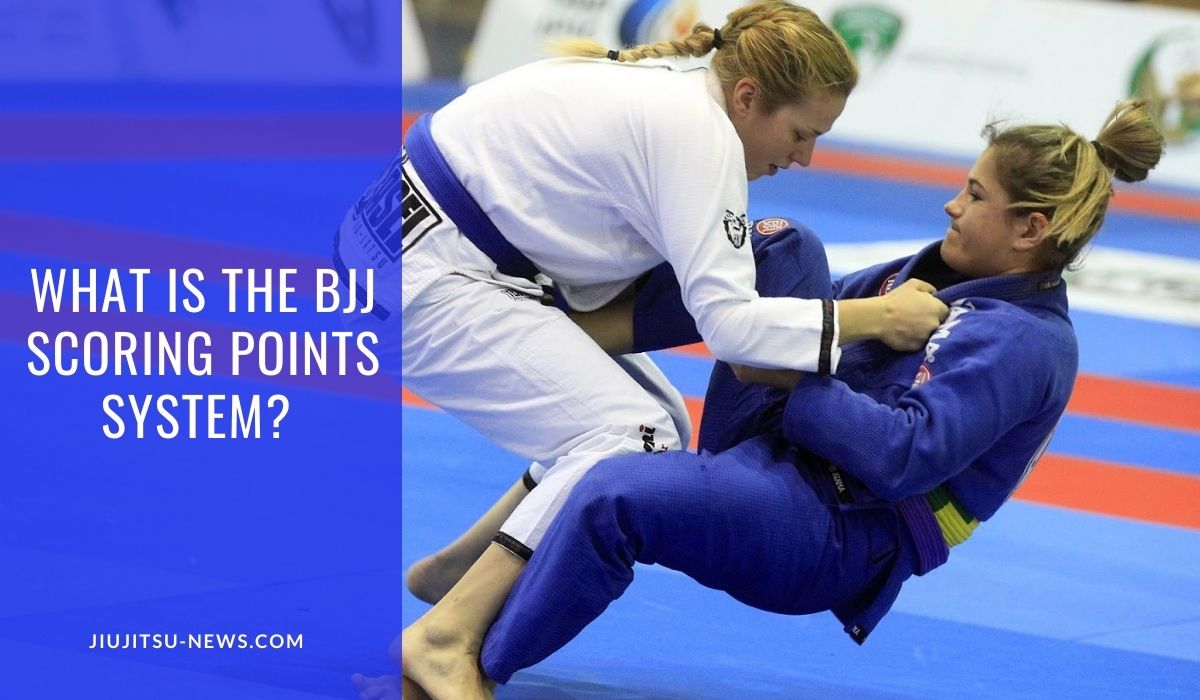 The Brazilian jiu-jitsu scoring points system determines the winner of each competition match when there is no submission.

If not, it will assist competitors in concentrating on the most dominant positions to prepare for competitions more effectively.

A competitor can score points in various ways in a Brazilian jiu-jitsu match, like leading his opponent to certain positions and maneuvers.

Here is the scoring points system by order of importance in gi and no-gi according to the IBJJF, SJJIF, and other BJJ organizations.

Understanding how the BJJ point system works is critical when competing in Brazilian jiu-jitsu tournaments.

Here is the jiu-jitsu points system according to the IBJJF and SJJIF federations:

N.B: Points will be awarded only if the position has been held for 3 seconds or more.

The Abu Dhabi Combat Club (ADCC) is one of the best grappling organizations that host several events worldwide, such as the ADCC World Championship.

It is a tough and challenging grappling contest that gathers the best grapplers in the world.

The ADCC emphasizes submissions grappling over scoring points. Therefore, an ADCC competitor does not earn positive points until the end of the first half of the match. After that, he earns both positive and negative points.

N.B: Points will be awarded only if the position has been held for 3 seconds or more.

Related Article: ADCC World Championship 2022: Everything You Need to Know

The NAGA points system for gi competitions is similar to the IBJJF points system. Here are the NAGA (Gi) scoring points by dominant positions and techniques:

Although, the NAGA scoring points system in no-gi is different from the IBJJF points system. Here is the NAGA (No-Gi) jiu-jitsu point scoring system:

In addition, to score points in NAGA gi and no-gi tournaments, you must have dominant control over your opponent for 3 seconds or more.

Aside from that, in the different grappling tournaments, competitors may accumulate advantages or penalties during the fight alongside the BJJ scoring points above.

For example, advantage points are usually awarded when an athlete comes close to scoring points or submitting their opponent.

However, penalties are imposed when the competitor commits a severe foul or lacks combativeness.

How to Score Points in Brazilian Jiu-Jitsu?

Therefore, A practitioner can use takedowns to take his opponent to the ground and then control or submit him using various techniques such as chokeholds and joint locks.

Whether competing in gi or no-gi jiu-jitsu competitions, you can score points by reaching dominant positions and performing specific techniques like takedowns, sweeps, etc. Here are some legit ways to score points in a jiu-jitsu fight:

Getting a successful Takedown is one of the most common scoring points in jiu-jitsu. A takedown is achieved by taking a standing opponent to the ground using a single leg, double leg, arm drag, and other techniques. In that case, you’ll get 2 points.

Passing your opponent’s guard is another way to score points in BJJ. Toreando, knee slice, double under, single under, and over under are a few techniques you can use to pass the guard.

So, if you successfully perform a guard passing maneuver and hold the opponent for 3 seconds, you will receive 3 points.

Sweeps are another popular method of scoring points in Brazilian jiu-jitsu. A sweep can be obtained by unbalancing a top opponent and moving him to a bottom position.

If you successfully perform a sweeping maneuver and maintain the new position for 3 seconds, you will receive 2 points.

Back control is considered the most dominant position in BJJ. It is a difficult position to obtain, but it grants you complete dominance over your opponent through various effective techniques and submissions.

Otherwise, achieving and maintaining the back mount position for 3 seconds will help you score 4 points.

The mount is another dominant position in Brazilian jiu-jitsu. It provides access to a variety of practical fighting techniques and submissions.

Otherwise, reaching the full mount position and holding it for 3 seconds will help you score 4 points.

Knee-on-belly is a jiu-jitsu position that puts a lot of pressure on the opponent’s stomach. It can be reached from the side control after passing the guard.

Otherwise, achieving and maintaining the knee-on-belly position for 3 seconds will help you score 2 points.

A BJJ competitor aims to tap out the opponent rather than win points. Therefore, although the point system is still a vital part of the game, you must understand how to use it!

Aside from that, the total scoring points possible depends on your game plan. So, as a wise competitor, you prioritize working on takedowns, sweeps, full mount, back control, and so on when preparing for a tournament to score maximum points.

Otherwise, competitors, from white to black belts, don’t neglect submissions and prefer working from top to bottom. Therefore, they will prioritize takedowns, guard passing, knee on belly, getting the mount position, etc.

Related Article: How to Get the Most of Your First BJJ Blue Belt Tournament?

BJJ tournament rules vary from one organization to another (IBJJF, ADCC, NAGA, etc.); here are a few examples:

The video below highlights some crucial rules in Brazilian jiu-jitsu tournaments through various scenarios.

So, if you’re going to compete, make sure to read the tournament rules.

The BJJ scoring system educates competitors on the points granted for specific positions and movements in tournaments. For example, competitors earn points when getting takedowns, guard pass, sweep, full mount, back control, etc.

Otherwise, to win a jiu-jitsu match, you must either submit your opponent or accumulate more points than he does.

So, concentrate on these scoring situations while preparing for contests and developing your jiu-jitsu game. How Many Points Is a Sweep in BJJ?

A sweep in Brazilian Jiu-Jitsu is a move that moves your opponent from a top position to a bottom one.

Sweeps are one of the most common ways to score points in jiu-jitsu. You will receive 2 points if you can sweep your opponent and maintain a new position for three seconds.

How Many Points Is Closed Guard?

The closed guard is a position in which the fighter wraps their legs around their opponent’s waist and locks their ankles together.

This position allows the bottom player to keep their opponent under control and prevent him from attacking.

As a result, closed guard is considered an offensive and defensive position. However, there are no points awarded for achieving the closed guard position.

Yet, getting into a closed guard after talking your opponent down gives you 2 points for the takedown.

How Many Points Is a Knee on Your Stomach?

A knee to the stomach is usually worth two points in jiu-jitsu. Otherwise, you can use this move to establish dominance and set up submissions that may help you end the fight.

How Does the Point System in BJJ Work?

The Brazilian jiu-jitsu scoring points system is utilized to inform competitors of the points awarded for specific positions and moves to facilitate the organization of competitions.

It tells competitors of the points awarded for particular positions and moves, including takedowns, passing the guard, sweeps, and back control.

Do You Get Points for Side Control BJJ?

Side control is one of the fundamental positions in Brazilian jiu-jitsu. You will receive three points if you pass the guard, reach the top side or north-south, and hold the position for three seconds.

How Many Points Do I Get for Submission in Jiu Jitsu?

Points are awarded for obtaining specific positions and moves to determine the winner of a BJJ fight where there is no submission.

However, the referee will stop the bout when a submission happens, and the scored points will be meaningless.

How Do You Win a BJJ Match?

In Brazilian jiu-jitsu competitions, a competitor can win the match by submitting his opponent. If the submission does not occur, the competitor may win the game by scoring more points over his opponent.

Otherwise, if there is a draw, the competitor should gain more advantages and fewer penalties than his opponent.

Finally, sharing this article on social media will be great. Thanks!