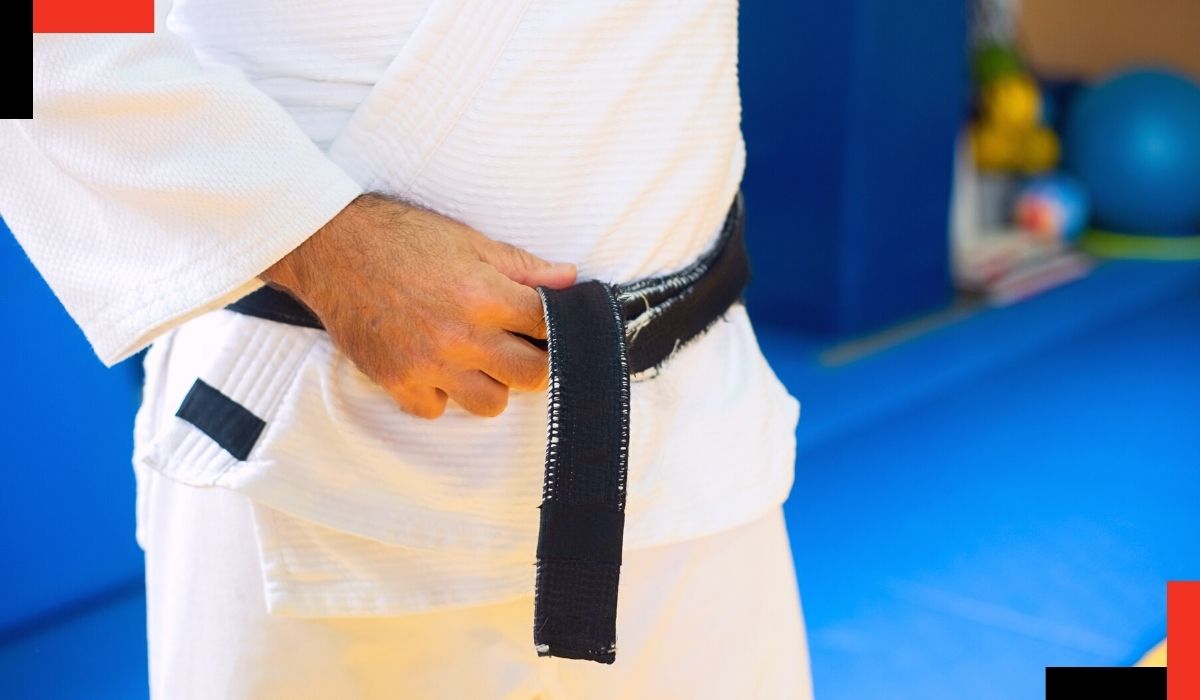 Brazilian jiu-jitsu has an excellent belt ranking, with eight belt levels for adults. Otherwise, students might earn stripes based on time, knowledge, conduct, and competition performance, among other things. So, how long does it take to advance to the next jiu-jitsu belt?

Moving up to the next jiu-jitsu belt in Brazilian jiu-jitsu will require an average of one to two years of training. So, for example, achieving the black belt level in BJJ will take you around ten years on average.

As we progress through this post, we’ll talk about how long it will take you to get each BJJ belt from white to red, according to our experience. Stay tuned!

How Long Does It Take to Earn Belts in Jiu-Jitsu?

BJJ belt grades progress from the novice levels of white and blue belts to the intermediate levels of purple and, eventually, the advanced levels of brown and black belts. Indeed, jiu-jitsu legends with decades of training and coaching may obtain higher belts like coral and red belts.

Here is the average timeline to progress through belts in BJJ.

N.B: The above promotion timeline shows the average years to get a BJJ belt. However, it may differ from student to student based on various factors, such as their martial arts experience.

Why Does Earning Belt in Jiu-Jitsu Take So Long?

Brazilian jiu-jitsu belts indicate the level of a student and his accumulated knowledge. Practitioners can earn belt ranks by achieving specific criteria such as:

How Long Does It Take to Get a White Belt in BJJ?

A white belt is awarded to those who place their feet on the BJJ mat. It is the first rank in Brazilian jiu-jitsu and the most crucial since you will know about this magnificent martial art for the first time.

As a knowledgeable white belt, you must be conversant with a wide range of jiu-jitsu movements and techniques to improve your overall performance, among other things.

This advancement takes time and determines your readiness to advance to the following rank level, blue belt.

How Long Does It Take to Get a Blue Belt in BJJ?

Moving from white to blue belts in jiu-jitsu usually takes two years of serious training. However, the amount of time may vary based on the criteria of each institution. Meanwhile, students must demonstrate to their coaches that they deserve the blue belt.

Aside from that, The blue belt is second in Brazilian jiu-jitsu. It represents practitioners who have trained in BJJ for at least two years. Moreover, A blue belt is a rugged individual, especially psychologically, who did not give up at the white belt level.

At this level, a practitioner understands the major ground stances and can perform the fundamental techniques quickly.

In addition, because they are well-versed in a few techniques and submissions for each situation, they can roll productively without relying on sheer force or returning to instinct.

Thus, blue belts have an excellent jiu-jitsu game. Indeed, they are working on making it more complex by incorporating more advanced techniques. So, you will see blue belt students try new advanced positions such as Dela Riva and spider guards, etc.

It takes time to progress toward mastering advanced BJJ positions. Yet, it determines a blue belt practitioner’s readiness to advance to the next rank level, the purple belt.

How Long Does It Take to Get a Purple Belt in BJJ?

It can take up to six years of jiu-jitsu training to earn the purple belt rank. Despite this, you can advance the level of the purple belt in less or more than that period since the requirement may vary from school to school.

Aside from that, the purple belt is the third colored belt in the Brazilian jiu-jitsu system. It is the stage at which a student begins to dig deep to sharpen the efficiency of his BJJ positioning.

Otherwise, using his expertise as a model, the purple belt can instruct lower-ranked practitioners on progress in jiu-jitsu. Indeed, he must cultivate strong connections with their blue belt teammates.

How Long to Get a Brown Belt in BJJ?

It can take around seven to eight years of BJJ training to earn a purple belt since your early mat days. However, a consistent practitioner can generally achieve the brown belt in less than six years.

Aside from that, the brown belt is the fourth colored belt in the BJJ ranking system, following the black belt in the hierarchy. Indeed, students with this rank are improving their techniques list for competition.

How Long to Get a Black Belt in BJJ?

Achieving a black belt rank can take up to ten years of BJJ training. Otherwise, several practitioners think the black belt level is the official start of their jiu-jitsu journey.

Aside from that, the black belt is the fifth colored belt in the Brazilian jiu-jitsu system, following the brown belt and preceding the coral and red belts. Therefore, it is the most sought-after rank in BJJ and other martial arts disciplines due to its significance.

How Long to Get Each Degree of Black Belt In BJJ?

The BJJ black belt contains eleven levels until the 10th-degree black belt. Besides, moving from one level to another might take one to fifteen years.

Related: how many degrees of black belt are there in jiu-jitsu?; Click here.

How Long Does It Take to Get a Red/Black Coral Belt?

The red and black coral belt is a 7th-degree black belt in Brazilian jiu-jitsu. This belt rank can take up to +35 years of BJJ coaching and practice.

The IBJJF, on the other hand, requires red and black belts to be at their present level for at least seven years before moving up to the next rank.

How Long Does It Take to Get a Red/White Coral Belt?

The red and white coral belt is an 8th-degree black belt in Brazilian jiu-jitsu. This belt rank can take up to +42 years of BJJ coaching and practice.

Furthermore, the International Brazilian Jiu-Jitsu Federation requires red and white belts to have spent a minimum of ten years at this level before being eligible for advancement to the following rank (red belt).

How Long Does It Take to Get a Red Belt in BJJ?

Getting a red belt can take up to +52 years of BJJ practice. It is the highest belt rank in Brazilian jiu-jitsu and denotes a Grand Master who has attained the 9th or 10th-degree black belt in martial arts.

Related: Does Japanese Jiu-Jitsu Have Belts? (A Closer Look)

Brazilian jiu-jitsu (BJJ) is a compelling grappling style that concentrates on ground fighting. Otherwise, this fantastic martial art awards numerous colored belts to its practitioners to represent their degrees and gained expertise. So, how long does it take to earn belts in jiu-jitsu?

A consistent practitioner will advance in BJJ rank within one to two years of training. Otherwise, he will add new belt stripes after three to six months of consistent time commitment to Brazilian jiu-jitsu.

I hope you found this post helpful in learning how long it takes to obtain a Brazilian jiu-jitsu belt. Consequently, you’ll create a strategy to develop your jiu-jitsu while establishing achievable targets.

Related: The fantastic things that Brazilian jiu-jitsu can teach you; Click here.